Jetsons Prove the Future Isn't What It Used to Be 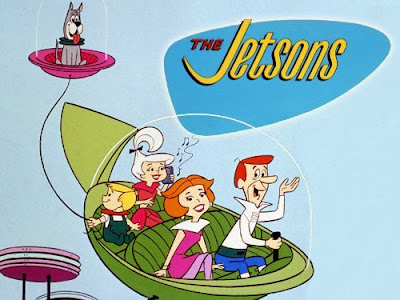 Do historians always look at the past? Not always. Some historians conduct research on how conceptions of the future have changed over time.

If that doesn’t make sense, think about the common observation that the future isn't what it used to be. That's where historians come in, to ask how it changed and why.

There are many ways to look at how the future has changed, and last week at the annual conference of the Society for the History of Technology in Tacoma, Washington, University of Texas historian Laura Jacquelyn Simmons analyzed the case of The Jetsons, the 1960s cartoon show that featured a family living an automated life in 2062.

The head of the family, George Jetson, pushed buttons at Spacely Space Sprockets and was the sole breadwinner for his wife Jane, teenage daughter Judy and younger son Elroy, their dog Astro and robot maid Rosie.

The Jetsons' flying cars and space needle architecture never came to pass. But George Jetson was subject to constant and capricious surveillance by his boss, something that has come true for many harried workers. And Jane Jetson still found it a challenge to feed her family, even with a push-button pantry.

While many of the changes portended by The Jetsons didn't become reality, the series depicted gender and family roles that are now outdated. And it missed many other changes that were never envisioned back in the 1960s.

Take this article for example. It was written on a personal laptop computer that has arisen instead of the widely anticipated mainframe computers like 2001's Hal. This article was commissioned online in response to a posting I made on the popular social networking website Facebook, whose popularity few would have predicted even a decade ago. Anyone anywhere with internet connections can read this article today, not just those who get the Times Colonist delivered to their doorsteps.

So why do technologies advance in unexpected directions? That's why historians and other social scientists such as sociologists study technology.

Historians are no better than anyone else at making predictions, but they do look for common threads and forces that drive change, be they political, social, economic or technological, that might help point the way for emerging technological systems.

Think of the arguments regularly featured on the pages of the Times Colonist about our transportation infrastructure, which is a big and expensive technological system. Why is there is a “bridge to nowhere” in Langford, an airport overpass under construction, but nothing to relieve congestion on Highway 1 at Mackenzie? These topics generate many arguments, including historical ones.

And historians of technology do look into the past to see how technologies helped turn historical events. David Zimmerman, a military historian at the University of Victoria, told the Tacoma conference about new ideas on the impact of tanks, trucks and machine guns in World War I.

My own historical research deals with the history of space exploration, a key part of the future envisioned in The Jetsons. Back in the 1960s, many people looked forward to seeing astronauts on Mars before the end of the twentieth century, but in fact no one has ventured beyond low Earth orbit since 1972, and only robot vehicles have explored Mars and the other planets and moons of our solar system. Humans on Mars seem as distant today as they did back in the days of the Apollo moon landings.

A couple of reasons for the dashed dreams of space cadets came up during the presentation on The Jetsons. The original series only ran one season, because it was not especially popular, and indeed historians have found that the space program of the 1960s was not really that popular either. Why? One member of the audience at the Jetsons presentation observed that she hated The Jetsons because the series envisioned lives totally divorced from the Earth – a future apparently without forests, gardens or nature. Environmentalism, amongst other things, has trumped space travel.

Yet The Jetsons television show was revived in the 1980s, and the Jetsons themselves remain popular cultural characters. Astronauts still rocket into space, and the dream of trips to Mars has not died. Many chapters remain to be written on the history of the future.