Book Review: An Astronaut's Guide to Life on Earth 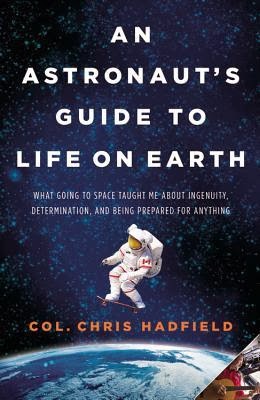 An Astronaut's Guide to Life on Earth

The top Canadian space story of 2013 was without a doubt Canadian astronaut Chris Hadfield's stint as  commander of the International Space Station. The fact that Hadfield was the first Canadian and only the second person from outside Russia or the United States to hold the prestigious command only begins to explain his prominence over the past year.

During his five months on board the ISS, Hadfield used social media such as Facebook, Twitter, Tumblr and YouTube to take earthbound humans along with him for his third voyage into space, and he used them to far greater effect than anyone who had preceded him into space. Hadfield has gained more than a million followers on Twitter, and his weightless video version of David Bowie's "Space Oddity" has been viewed more than 20 million times on YouTube. His fame has spread far beyond Canada's borders.

The native of Sarnia, Ontario, returned to Earth in May and soon hung up his spacesuit. Last fall he produced his first book, An Astronaut's Guide to Life on Earth.

Nine Canadians have rocketed into space, but before Hadfield, Roberta Bondar was the only Canadian astronaut who had written a book about her experiences with her 1994 book, Touching the Earth.

Hadfield's book adds to the already rich body of astronaut autobiographies, most of them written by American astronauts who flew during the early human space programs of the 1960s. A few American shuttle astronauts and Russian cosmonauts have also produced autobiographies.

So Hadfield set out to produce something a little different, as suggested in the title of his book and in the subtitle used in non-Canadian editions: What Going into Space Taught Me About Ingenuity, Determination and Being Prepared for Anything.

The book is a relatively compact version of Hadfield's life story, organized around his views of what it took to succeed as an astronaut. The result is a captivating view of astronaut life in the two most recent decades of human space exploration.

After a career in the Canadian military as a fighter pilot, Hadfield joined the Canadian astronaut team in 1992 just as the competition between the U.S. and Russia in space was giving way to cooperation, a change that would shape his career in space.

In his first flight aboard the shuttle Atlantis in 1995, Hadfield was part of the second shuttle crew to dock with the Russian space station Mir. On his second flight aboard the shuttle Endeavour in 2001, Hadfield became the first Canadian to walk in space as he helped install Canadarm2 on board the International Space Station. Years of training in Canada, the U.S. and Russia to prepare for a long duration flight to the station were rewarded when Hadfield was tapped to command the ISS on Expedition 35.

In common with other astronaut biographies, Hadfield recounts these highlights and takes the readers along for launches, his historic spacewalk, and re-entries. But he also talks about many of the less agreeable aspects of astronaut life, including repairing toilets, dealing with stultifying bureaucracy, and heart stopping moments when his life was in danger due to unexpected and unglamorous problems.

In his book, Hadfield emphasizes the importance of preparation for every eventuality, including worst case scenarios, and of "sweating the small stuff," explaining how a lack of preparation or study for even the smallest matters can put one's life in danger in high performance aircraft and in space. His points are driven home with stories from his own life, including how he nearly missed becoming a military pilot due to lack of preparation for a flight, and the time he almost lost his mission to command the ISS because of a minor medical problem.

Even someone as talented as Hadfield required a huge amount of work, sacrifice and self-discipline to reach the heights of his rarefied profession. And he drives home the importance of humility, something one learns immediately upon joining the ranks of astronauts, and keeps learning, especially if one wants to have a long career in the astronaut corps.

For anyone with a passing interest in space travel, An Astronaut's Guide to Life on Earth provides interesting and valuable glimpses into the lives of today's astronauts, who still face the great dangers of space despite toiling in relative obscurity. Even those who are familiar with space travel will learn from Hadfield's book, since few people who have flown in recent years have written about their experiences. His descriptions of flying to and from the ISS on the Russian Soyuz ferry craft were of particular interest to me.

And how did Hadfield become a social media sensation? As he outlines in his book, much of the credit goes to his son Evan, "the communications guru in our family, savvy about the media in general and social media in particular."  Hadfield produced memorable images in space with encouragement from his son, who took those photos and descriptions of life in space, and used them to produce the tweets, postings, videos and sound files, and finally, Hadfield's unforgettable version of  "Space Oddity."

Space travel is a team enterprise, and even Chris Hadfield's individual success was a team effort. Not a bad lesson about life.