This week amateur astronomers from across Canada are converging on the University of Victoria for an annual gathering that goes back to 1960.

Called the General Assembly of the Royal Astronomical Society of Canada, this meeting moves from one locale in Canada to another each year. Last year, it took place in Thunder Bay, Ontario, and next year it is slated for Halifax, Nova Scotia. The GA has previously taken place in Victoria in 1972, 1981, 1988, and 1998.

Part of the meeting is business - the Annual General Meeting of the RASC takes place there. But it is also a place for great guest speakers and for papers presented by RASC members. And there is plenty of socializing going on as well.

The RASC got its start as an informal grouping of astronomy enthusiasts in Toronto in 1868, and the  and during the early years, it was a Toronto organization. The Society was formally incorporated in 1890 and in 1903, the society won its royal designation from King Edward VII and took on the RASC name. By then astronomy clubs in other Canadian centres began to join the RASC, and it evolved from a Toronto group into a national society that today includes astronomers in all parts of Canada.

Each local club affiliated to the RASC is known as a Centre, and today there are 29 centres spread out amongst Canada's 10 provinces. About 4,200 people belong to the RASC.

This year, the Victoria Centre is celebrating the 100th anniversary of its creation, although I have found that efforts to set up an astronomy club in Victoria actually began in 1907. By 1914, the Dominion Astrophysical Observatory was under construction on Little Saanich Mountain, and the presence of this world-class observatory, along with the arrival fifty years later of the University of Victoria and its physics and astronomy department, has ensured the durability of the Victoria Centre.

For much of the history of the RASC, it held a formal Annual General Meeting in Toronto, but in 1960 the first GA took place in Montreal. I first joined the RASC while I was finishing grade school, and attended my first GA in Calgary in 1968. While many of the people I met there are gone, there will be two or three other participants from that meeting who I'll catch up with at this Victoria GA.

Astronomy has changed a great deal in those years, and so has the RASC. In the 1960s it was a mixture of amateur and professional astronomers, but as the ranks of professionals grew in the 1960s and 1970s, they organized their own professional association. Fortunately, many have chosen to remain with the RASC. The instruments we amateurs use today are far more powerful and sophisticated than what we had in the 1960s, which means that amateurs are playing a bigger role in formal scientific work than once was the case. And the astro photos taken by many of my friends in the RASC today can compete with almost anything else taken from Earth.

The Centres provide a place for members to come together for shared astronomical activities including star parties and public outreach, such as the Saturday night observing that will take place this summer at the Dominion Astrophysical Observatory. The Society produces publications such as the annual Observer's Handbook, the Observer's Calendar, the RASC Journal and others. For such a large country as Canada, RASC provides a rare opportunity for Canada's amateur astronomers to congregate.

With the arrival of online resources and social media, not to mention the many changes taking place in Canadian society, we in the RASC are working hard to keep up with relevant events and services. Fortunately, new technologies are making amateur astronomy more exciting and accessible.

Ten years ago, I was president of the Victoria Centre, and now I am the Second Vice President of the RASC. To my RASC friends from the rest of Canada, welcome to Victoria! Anyone else who is interested in the RASC is invited to our two public lectures during the GA, which goes until June 29. Further information is available at victoria.rasc.ca 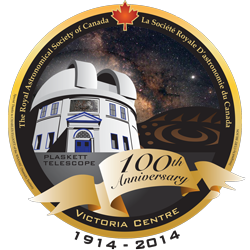