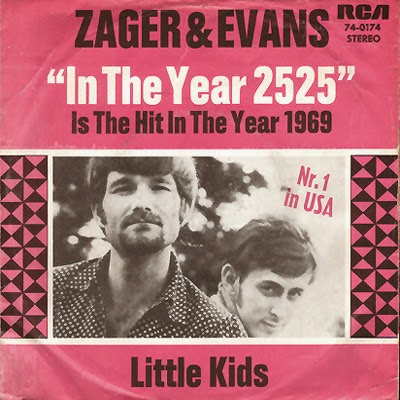 Forty-five years ago this week the hottest song in the English-speaking world was an apocalyptic tune that looked forward to a future of warped human life, resource depletion and ultimately a harsh judgement from the almighty.

In that final summer of the 1960s, an unknown folk rock duo from Nebraska found themselves the owner of the top spot in the Billboard's Top 40 chart for six weeks. Despite their best efforts, they never charted another song.

The song, "In the Year 2525," rocketed to the top of the 45 singles charts in the U.S., Canada, Britain and Australia just as Apollo 11 and its astronauts prepared to blast off for the first landing of humans on the Moon. In my view, the timing of the two events was not a coincidence.

Officially known as "In the Year 2525 (Exordium and Terminus)," the song was written in a half hour in 1964 by Rick Evans of Lincoln, Nebraska. Four years later, Evans was in a duo with his friend Denny Zager, who reluctantly agreed to Evans' urgings to record the song. Zager and Evans recorded the song on Truth records in Odessa, Texas, and after the song became a local hit, RCA Records signed the duo and soon the song began its ride to the heights of popularity.

Just before Apollo 11 left for the Moon on July 16, 1969, "In the Year 2525" became number one in the United States, and it still held that spot a month later during that other major event of the summer of '69, the Woodstock Music Festival.

To me, the song reflected the conflicted feelings many people had about the first landing on the Moon, an event that confronted many people with the future and the hopes and fears it engenders. Although the Moon landing was ultimately seen to be a positive event, many questioned the need to go there.

The 1960s was a decade that awoke many controversies over social issues, including civil rights, women's rights, the need for wars such as Vietnam, and questioning of technological progress in the form of the environmental movement. Among the spectators at the Kennedy Space Center as Apollo 11 departed for the Moon was a group of civil rights leaders protesting spending on space travel at a time when so many Americans, particularly African Americans, were living in poverty.

For millions of people watching astronauts flying to the Moon, an event torn out of the pages of science fiction, Zager and Evans' song expressed the concerns they felt about the direction humankind was going. For some, it recalled other science fiction tales that they had absorbed from books, pulp magazines and movies.

Even before Neil Armstrong and Buzz Aldrin walked on the Moon, Apollo had become a major cultural milestone. That started seven months earlier, when Apollo 8 astronauts circled the Moon and returned home with images of the Earth rising over the lunar surface, which drove home the fragility and isolation of our home planet.

The drama of Apollo 11 was heightened by the great danger the astronauts faced by flying so far away from home, something that was forgotten or trivialized in  the celebrations that followed the successful completion of the flight.

Forty-five years after that historic milestone, historians and others are still debating the meaning of Apollo 11. Many people now argue that Apollo may not have been the great historical turning point that many believed at the time.

In an effort to explain why humans have stuck close to home since the last Apollo astronauts returned home in 1972, some people have suggested that Apollo represented a 21st century event that took place prematurely in the middle of the 20th century. That may well be true, but it remains a matter of conjecture.

And one reason why humanity stepped back after its first move into the cosmos could be that too many people looked at the future and didn't like what they saw. "In the Year 2525" reflected many people's concerns about where humankind was going.

Whether the hopes of Apollo 11 or the fears of "In the Year 2525" represent our future remains a topic of lively argument.

In my opinion, Zager and Evans wouldn't have been even a one-hit wonder without Apollo 11. And whether that would have been a good thing - well, that's another matter!
Posted by Chris Gainor at 11:07