Thoughts on the History of Technology 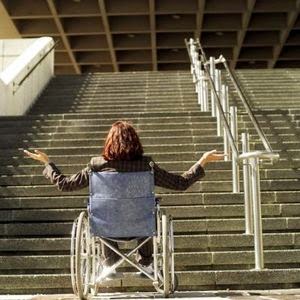 What do historians of technology do? Many people may think that we simply track the parts that go into the machines that we use in our lives and the systems that make modern life what it is. Or that we look at the individuals who are associated with various technologies, such as Thomas Edison or Bill Gates.

These topics are but a small part of our studies. The interaction of society and technology is a complicated one, and by studying this interaction we can learn a great deal about how technology and society evolve.

In explaining why we study the evolution of technology, I often start off with seemingly simple questions: are the technologies we use determined by the physical qualities of the devices involved? Or do people determine how these devices develop and are used?

An example I like to use when dealing with this question concerns stairs. When I display a photo of stairs being confronted by a person in a wheelchair, no one needs to be told what the person in the wheelchair is thinking. The person is wondering why there are only stairs and not a way of moving up or down that accommodates their disability.

Once buildings were equipped only with stairs, but today more buildings include other options such as ramps to help people get up and down regardless of their abilities. To put only stairs in a building was a conscious decision made by people, not something dictated by physics. And the fact that today buildings are routinely created to be accessible to all is a result of social change resulting from persons with disabilities and others advocating for this change.

Historians of technology look at questions like this, and at the design and use of things like the automobile. Why do our cars have certain capabilities and not others? Why and how did the internal combustion engine become the primary power source? Why not steam engines or the electric car? It's much more complicated than the superiority of one type of engine over another. It involved people making certain choices and sometimes acting to close off other choices for a variety of reasons.

In the matter of space exploration, we look at why it has progressed in the way it did. Why have humans gone to the Moon already? And why has no one gone back for more than four decades?

The history of technology is a relatively new discipline. Some date it to 1958, when the Society for the History of Technology (SHOT) was formed, although it certainly goes back farther as part of the older discipline of the history of science.


Earlier this year, we lost one of the great historians of technology and one whose writings influence my own work, Thomas Parke Hughes, who passed away in Virginia at the age of 90.

Hughes is probably best known for his 1983 book, Networks of Power: Electrification in Western Society, 1880-1930, which compares how electrical power systems were set up in those years in Britain, Germany and the United States. While on the face of it, this is a dry subject, Hughes' account contained many insights about technology and the societies he covered in that book.

For example, early British power systems were private, small and highly decentralized. During this time, Britons moving just a few blocks would have to deal with a different power system and a different power provider with their own voltages and plug designs. Perhaps it was just as well that they had far fewer appliances back then! Germany had more centralized power systems that moved easily from private to state control, and the U.S. has been served by large private providers who fought ferociously against public power. The Great War that started 100 years ago led to greater centralization of power systems in all these places.

In that book, Hughes introduced ideas about phases in the development of technological systems, starting with invention and development, then technology transfer to and from other systems, followed by system growth and technological momentum as more people become dependent on a particular system. He also raised the idea of the technological reverse salient, where a system component does not progress along with other parts of the system in question, affecting the evolution of the whole system.

In American Genesis: A Century of Innovation and Technological Enthusiasm in 1988, Hughes wrote about how American culture was shaped by technological change and widespread popular enthusiasm for new technologies.

Two more recent works returned to technological systems. Rescuing Prometheus (1998) looked at the rise of systems engineering in the world of Cold War missile systems with the SAGE computer system and the Atlas missile, an area where I have done much of my historical work, and then its fall in large infrastructure projects in American cities, followed by its subsequent return in computer systems leading to the internet.

In Human Built World in 2004, Hughes discussed the interfaces between society and technology, arguing for a seamless web between the human and technological realms.

Hughes did not believe in technological determination and neither do I. But that doesn't mean that there isn't a complex interplay between technological systems and the societies they live in, with technologies affecting and being affected by political, social, and economic factors as well as their own physical properties.

Historians of technology such as Thomas Hughes have given us many insights about how technology affects our lives, and how society and social forces have shaped the technologies that we increasingly depend upon in our lives. These insights help us anticipate what the technological changes of today and tomorrow may bring.