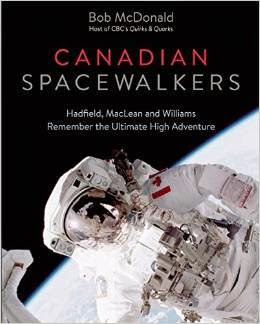 By Bob McDonald
Douglas and McIntyre

Fifty years ago in March, a hatch opened in a strange looking Soviet spacecraft and for the first time, a human emerged into open space, protected only by a space suit. Cosmonaut Alexei Leonov spent ten minutes outside Voskhod 2, and a few weeks later, American astronaut Ed White spent nearly twenty minutes walking in space outside his Gemini 4 spacecraft.

The half century of spacewalking is being celebrated with a special exhibition at the Smithsonian Institution's National Air and Space Museum, Outside the Spacecraft: 50 Years of Extra-Vehicular Activity.

Space-suited astronauts working in open space have long been a staple of science fiction, but the real story of walking in space has taken many unexpected twists and turns.

Both Leonov and White faced great danger due to difficulties getting back into their spacecraft, and later spacewalks in the Gemini program showed that elaborate preparation was needed before every venture outside the spacecraft. Space shuttle astronauts who carried out maintenance and repair work  on satellites such as the Hubble Space Telescope found that the amount of training required to do the job right was even greater than they had expected.

Chris Hadfield became the first Canadian to walk in space in 2001, when he helped install Canadarm2 on board the International Space Station during a mission of the space shuttle Endeavour. Canadian astronauts Steve MacLean and Dave Williams subsequently joined the ranks of spacewalkers during ISS construction missions in 2006 and 2007.

Bob McDonald, the host of CBC Radio's Quirks and Quarks and a longtime space enthusiast, got together with the three astronauts and NASA spacesuit technician Robert Knight to talk about walking in space. The result is a book that gives the reader a real taste of the astronaut experience in gritty detail.

Spacewalking involves a lot of hard work, starting with lengthy rehearsals in gigantic water tanks and virtual reality simulators. Doing fine mechanical work in space wearing a thick inflated gloves is not easy, either. Astronauts exercise their hands and keep their fingernails cut short to prevent injury during the difficult work done inside their space suits.

On his first space walk, Hadfield was nearly blinded when a chemical used to keep his visor from fogging got in his eyes, and this and other problems are discussed.

There is seemingly no question that McDonald is afraid to ask, including the wonders and fears the astronauts experienced outside the airlock, and the matter of passing gas in a space suit. McDonald also spices up the book with his own adventures in simulated space environments.

The stories told by the three astronauts, the technician and the author are contained in a well-illustrated, designed and printed book, which also stands out because so little has been written on the topic of spacewalking.

While there is much more to be said about space walking, including the trials of the early space walkers from both the United States and Russia, and the Apollo astronauts' experiences of walking on the Moon and in deep space, Canadian Spacewalkers has something for anyone who is interested in space exploration, regardless of their nationality.