After Apollo? Richard Nixon and the American Space Program


If there’s a president whose name is associated with America’s space program, it is John F. Kennedy, who in 1961 challenged NASA to land an astronaut on the moon and bring him home before the end of the 1960s. NASA famously complied, and in the decades that followed the end of the Apollo program in 1972, many people have lamented the state of America’s space program.

While Kennedy’s successor Lyndon B. Johnson saw to it that Apollo made it to the moon, something that happened six months after he left office, Johnson did nothing to advance the space program beyond that point. The big decisions about the future of the U.S. space program fell on Richard M. Nixon, and the space program from then to the present day has been the product of decisions made by Nixon, who was president from 1969 to 1974.

More than forty years after Nixon left office, there is finally a book that explores Nixon’s relationship with NASA and the decisions he made to proceed with a new human space program to succeed Apollo, the Space Shuttle. The book, After Apollo? Richard Nixon and the American Space Program, is by John M. Logsdon, the distinguished historian who wrote the best studies of Kennedy’s decision to go to the moon and who headed up George Washington University’s Space Policy Institute for many years.

For anyone who is interested in the history of the U.S. space program, this book is essential reading that contains many truths about the political environment presidents and other politicians face when deciding how much support to give to space exploration.

Nixon took office just as Apollo neared its lunar landing goal, and the pleasant duty of welcoming the astronauts home fell to Nixon. While Nixon admired the astronauts and the values they represented, Apollo was also a legacy of his great rival, Kennedy. After the success of Apollo 11, NASA had plans and equipment for nine more lunar landing attempts, and the story of how the last three missions were cancelled is told here in detail for the first time.

While a souring economy and aggressive budget cutters played their roles, some within NASA were concerned about the dangers the Apollo astronauts faced in their lunar flights. Nixon joined their ranks after the near-loss of the crew of Apollo 13 in 1970, and after three Apollo missions were cancelled, Nixon repeatedly called for the cancellation of the Apollo 16 and 17 missions out of fear of a space disaster in the election year of 1972.

With less than six months to go, Nixon allowed Apollo 16 to proceed because it would happen well after his upcoming trip to China, and Apollo 17 because it would take place after the election. For those many space enthusiasts who still decry the loss of Apollos 18, 19 and 20, this book makes chilling reading.

The fate of Skylab was also up for grabs, along with the shuttle and NASA itself, which was nearly converted to a general-purpose high-technology agency by the Nixon Administration.

The heart of After Apollo? is of course the shuttle, which Nixon announced on January 5, 1972. The story leading up to that decision is a complicated one, involving the attitudes of people at NASA, the Pentagon, and around Nixon. With the exceptional circumstances that led Kennedy to launch Apollo long past, public support for space exploration was low during Nixon’s time in office as Americans felt that Earthbound problems required more attention from their government. But one of those problems was a recession that hit the aerospace industry in California, a state that Nixon needed to win in 1972.

With an eye to NASA as a jobs program, Nixon approved the “full capability” shuttle promoted by the space agency. But to satisfy the goal of budget restraint while the shuttle was being built, the shuttle was not fully reusable, which greatly increased the shuttle’s operating costs long after Nixon left office. The Nixon-era political compromises that shaped the shuttle, including bringing the U.S. Air Force on board the program, also played roles in the loss of two shuttle crews in future years. The resulting program Logsdon termed a "policy mistake,” taking into account its many limitations, not least the shuttle's failure to lower the cost of flying into space.

The shuttle took nearly a decade to develop, and it flew for 30 years. NASA supported the shuttle concept with the idea that it would inevitably lead to construction of a space station in Earth orbit, which duly happened starting in 1998. The last space shuttle mission took place four years ago, and there is still no replacement vehicle for the shuttle. But the International Space Station still forms the heart of the U.S. human space program. This is still Richard Nixon’s space program.

Logsdon began work on this book with some interviews while Nixon was still in office, and his work was enriched with some of the famous tapes from the Nixon White House that illuminate Nixon’s sometimes conflicting attitudes to space exploration.

After Apollo? is in my opinion the most important work of space exploration history to appear in several years. As the United States begins to transition to the post-Nixon space program, policymakers and those interested in influencing them are well advised to read this book. 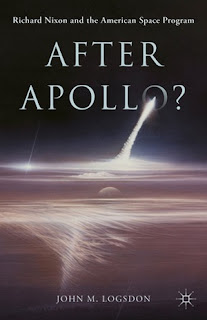