Celebrating the End of the Beginning of Solar System Exploration


New Horizons is now moving away from Pluto after its rendezvous with the King of the Kuiper Belt on July 14, 2015.

Many people around the world celebrated this historic encounter, notably at the control centre at the Johns Hopkins University Applied Physics Laboratory in Laurel, Maryland. One of the places where a Plutopalooza celebration took place on Encounter Day was near my home in Victoria, B.C.

During the nine-and-a-half years since New Horizons was launched from Cape Canaveral, I have patronized a restaurant in Victoria called Pluto’s Diner. I’ve appreciated its slogan (‘The Hottest Food from the Coolest Planet’), its great food, and its building, a former Pacific 66 service station, complete with its futuristic touches. Some years ago I decided that this would be the perfect place to celebrate when New Horizons reached Pluto.

A few weeks ago, I began to make arrangements, and finally encounter day arrived. New Horizons reached its closest point to Pluto, 12,500 km, early in the morning of July 14 in the Pacific time zone, but the spacecraft was gathering data and wouldn’t contact Earth until later in the day.

A signal from New Horizons that took four-and-a-half hours to traverse the nearly five billion km from Pluto reached Earth just before 6 p.m. Pacific time, just as Victoria astronomy enthusiasts began to fill the seats at Pluto’s Diner. The clapping and cheering on the NASA TV coverage on the screen at Pluto's signified that New Horizons had survived its encounter unscathed and had gathered a huge amount of data to be transmitted back to Earth over the next 16 months.

Thanks to the presence of the Dominion Astrophysical Observatory and the University of Victoria Physics and Astronomy Department, Victoria is home to several scientists who are conducting research on Pluto and other objects in the Kuiper Belt in the outer reaches of our solar system. Many of them are part of the New Horizons team. Two Victoria experts on the Kuiper Belt, Dr. Michele Bannister and Ivar Arroway, updated us on the latest findings from New Horizons and the history that led to the encounter. 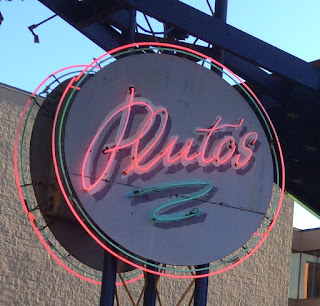 Pluto is so small and so far away that not even the Hubble Space Telescope could provide a clear image of this body. The fanciful rendering of Pluto on the restaurant’s neon sign was as good a guess as any of what Pluto looked like. Inside Pluto’s one could find photos of eight planets but not of Pluto. Thanks to a New Horizons image of Pluto released earlier in the day, I was able to present Pluto’s proprietor, Brun Dahlquist, with a real photo of Pluto to display in the diner.

Then it was time to eat, drink and celebrate. We enjoyed the items available on Pluto’s menu as well as decorative and delicious cupcakes from Melissa at Happyditty bakery.

Amidst the celebrations were memories of Pluto since its discovery in 1930 by a young American astronomer Clyde Tombaugh (1906-1997), some of whose ashes were on board New Horizons. And there were also memories of the great era of planetary encounters, which began in 1962 with Mariner 2’s flyby of Venus, and was concluding at Pluto.

As we found out the next day, there is still much more to come from New Horizons as it downlinks the data it gathered as it passed by Pluto and its moons. New Horizons is going on to another body in the Kuiper Belt, and other spacecraft are exploring other worlds right now - for example Rosetta and Philae at comet 67P/Churyumov-Gerasimenko, and Dawn at the largest object in the asteroid belt, Ceres.

More robots will explore other worlds, but the Pluto encounter marked the end of the first round of exploration of prominent bodies in the solar system. In Victoria, we were able to mark that milestone in style.