In Quest of New Views of Spaceflight History 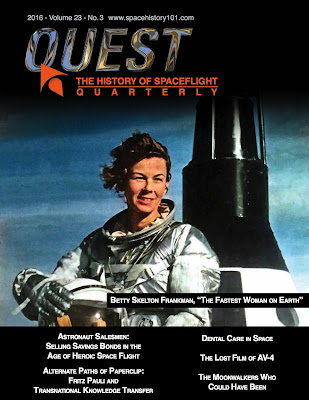 This week, a new film about the U.S. space program, "Hidden Figures," is opening in theatres around North America. The film tells the story of the female "human computers" who did the number crunching necessary to keep the first U.S. astronauts on their correct courses since even the most powerful computing machines at that time were not up to the demands of space travel.

"Hidden Figures" focuses on the story of three African American women who made major contributions to the success of America’s first astronaut flights. Like most Hollywood films, "Hidden Figures" often departs from the truth for dramatic effect, but the basic facts behind the film are correct. In at least one scene, "Hidden Figures" invites comparison between these poorly paid and anonymous African American women and the famous white male astronauts who were immortalized in the 1983 film, "The Right Stuff."

People like Margot Lee Shetterly, who wrote "Hidden Figures: The American Dream and the Untold Story of the Black Women Mathematicians Who Helped Win the Space Race,” have taken us beyond the experiences of the high-profile astronauts and flight controllers to tell the stories of lower profile and more marginalized people who made previously unsung contributions to humanity’s move into space.

"Hidden Figures," like the book that inspired it, shows that we now look at the history of space exploration differently from the way we did back in 1983 or in the 1960s.

The emergence of stories like this is only one change to the history of space exploration in recent years. Even before the Cold War ended 25 years ago, the previously inaccessible archives of the Soviet government and space program opened up and changed our understanding of what the Soviets did in the space race of the 1950s and 1960s. That and other changes have caused us to reconsider many ideas about the development of the U.S. space program, something I have been working on in my time as an historian of technology.

The early histories of space exploration were written by promoters of spaceflight, and they concentrated on particular artifacts such as rockets or spacecraft. Today new perspectives - including highly critical views of spaceflight - are being reflected in recent histories, and the social forces that affect technologies and many other things are considered in these histories.

The death of John Glenn last month completed the passing of the first group of U.S. astronauts. This year will mark 60 years since the launch of Sputnik opened up the move into space. The events of those early days are moving beyond living memory at the same time as a new generation with its own perspectives starts to put its own slant on space history.

In 2016 I added to my own historical work when I took on a new job as editor of Quest: The History of Spaceflight Quarterly. Quest was started 25 years ago, and is the only peer-reviewed journal dedicated to the history of space exploration. I have subscribed to Quest since the beginning, and I have contributed several historical articles and book reviews over the past 20 years.

As editor of Quest, I am searching for historical articles about space exploration, and I hope to encourage new people who want to work in this field just as the three previous Quest editors helped me find my way as an historian.

I also hope that Quest will continue to grow with provocative and ground-breaking articles and reviews that help explain the whys and hows of humanity’s first tentative steps beyond our home planet. The most recent issue of Quest, for example, contains two articles by newcomers to the field of spaceflight history, one from a professor of journalism and another from a student of visual design.

I’m proud to facilitate the dissemination new perspectives on history, and I look forward to what is coming up in future issues. I don’t know if any work in Quest will lead to a movie, but I’m sure it will be interesting just the same.
Posted by Chris Gainor at 10:46