Full Circle Under the Northern Lights

Recently I got one of the best speaking invitations I’ve ever received, from the Northern Nights annual Dark Sky Festival at Kluane National Park and Reserve in Yukon.

Kluane is home to glaciers, lakes, streams and the Saint Elias Mountains, including Canada’s tallest mountain, Mount Logan. I spent the weekend of September 21 in the park at Kathleen Lake near Haines Junction with stargazers from around Yukon and beyond as the guest of the Yukon Centre of the Royal Astronomical Society of Canada (RASC). The amazing scenery there, which rivals any other National Park in Canada, was enhanced by the fall colours.

The first evening of the festival was blessed with excellent weather for stargazing, but an even bigger treat was in store: a gigantic display of Northern Lights or Aurora Borealis that lit up the skies of Canada’s north in the early hours of September 22. Starting before midnight and going until sunrise, this display included many different forms of Aurorae, including arcs, rays, flames and spots, in green with hints of red and purple.

Enjoying this display in a sense took me full circle in my life as an astronomer. When I first became interested in astronomy as an adolescent, I lived in Edmonton and enjoyed a summer cottage further north in central Alberta. When I joined the RASC at that time, I met Dr. Earl Milton (1935-1999) of the University of Lethbridge, who enrolled me as an observer in his ongoing study of Auroral displays from the Edmonton area.

The newsletter of the Edmonton Centre of the RASC, Stardust, includes my reports in its 1968 and 1969 issues on the Auroral studies, and exhortations to observers to fill in their observation forms.

After I completed high school, I moved away to areas that rarely enjoy displays of the Northern Lights. As well, the growing problem of light pollution makes Aurorae harder to see in places like Edmonton. I’ve only seen them on rare occasions in recent years, although I’ve noted with great interest the photos of Aurora Borealis and Aurora Australis taken by astronauts flying on the Space Shuttle and the International Space Station, and images of Aurorae on planets such as Jupiter, Saturn, Uranus and Neptune.

Aurorae are created by the interaction of the solar wind with magnetic fields around the Earth and other planets. Even though the Sun is relatively quiet right now, there is still plenty of Auroral activity in our ionosphere.

The arrival of digital photography has simplified the task of obtaining good images of Aurorae, and astrophotographers such as my friend Alan Dyer have obtained many incredible images of the Northern Lights.

In recent years, interest in the Northern Lights has grown amongst the public, and now many tourism operators offer trips to Canada’s North and other northern locations to see the Aurora Borealis. In anticipation of a display in Yukon, I packed my camera and a tripod in hopes of bagging some Aurorae.

My first night in Yukon was clear without a display of Northern Lights, but the next night fulfilled my hopes for Aurorae and then some. Here are a few of my images of the Aurorae, the first I have ever obtained. And if these whet your appetite for Northern Lights, there are far better images available at sites such as amazingsky.net . 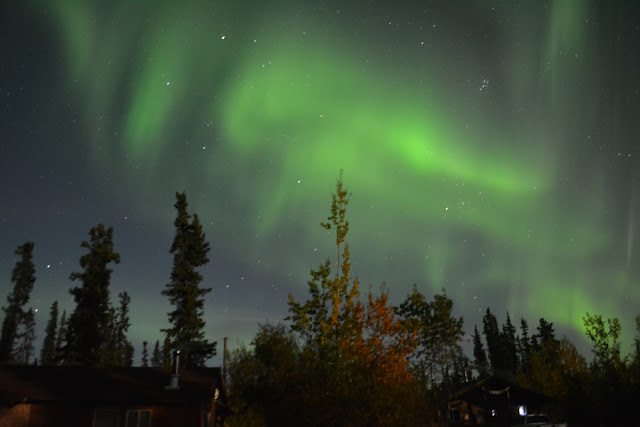