Nuclear Weapons Were A Driving Force For Space Exploration


August 6 and 9 mark the 75th anniversaries of the two times that nuclear weapons have been used in anger, when the United States military dropped atomic bombs on Hiroshima and Nagasaki in Japan, killing more than 100,000 people and injuring as many others.

The decision to use those bombs and their role in bringing an end to World War II and starting the Cold War remain matters of great controversy today. What is beyond debate is that the world has had to live ever since under the threat of nuclear weapons.

For many years, that threat centred on the Cold War confrontation between the U.S. and its allies, and the Soviet Union and its allies. For the last 30 years that threat has shifted to other countries that possess nuclear weapons, including countries in the Middle East, longtime adversaries India and Pakistan, and countries like Iran and North Korea. Today tensions are rising again between the U.S. and its former Cold War adversaries in Russia and China.

It is also important to note that the events of 75 years ago had a major impact humanity’s reach into space.

World War II led to advances in many military technologies. Fears during that war that German scientists had the means to develop nuclear weapons led the U.S. government, with cooperation from Great Britain and Canada, to build the first atomic bombs under a shroud of secrecy. Although Nazi Germany did not build its own nuclear weapons, it developed the first long-range rocket missile, the V-2, which it used in the final year of the war against targets in England, Belgium and France.

The first nuclear explosion took place on July 16, 1945, in the New Mexico desert, and it was kept secret for another three weeks until 16 hours after a single bomb levelled Hiroshima on the morning of August 6, 1945. The White House announced the bombing and revealed the basic facts about nuclear weapons, saying: “We have spent two billion dollars on the greatest scientific gamble in history - and won.”

The news of such a powerful new class of explosive immediately caused many people to think about marrying nuclear weapons to long-range rockets. The New York Times on August 8 contained an article speculating on this idea. At the same moment, both the U.S. and Soviet militaries were rounding up German rocket experts and collecting the remaining V-2 rockets and components in Germany.

The work on long-range missiles and nuclear weapons in the U.S. and the Soviet Union that followed the end of World War II took more than a dozen years to mature to the point where both Cold War adversaries began testing powerful new rockets known as intercontinental ballistic missiles (ICBMs) that were capable of lofting thermonuclear weapons to any point on Earth. The Soviet Union gave the world notice that it had that capability by launching the first artificial satellite of the Earth, Sputnik, on October 4, 1957, atop its R-7 ICBM.

Derivatives of that missile launched the first spacecraft to the Moon and beyond, and the first humans into space, and they are still in use today. The U.S. space program in the 20th century also depended on ICBMs and technologies advanced by ICBMs.

Without the nuclear weapons that first appeared 75 years ago, it is hard to imagine space exploration as we know it. Given the many calls on government resources, the large amounts of money required to build the first space launch vehicles could only be justified on the grounds of national defence. Even the highly expensive Apollo program that put the first humans on the Moon 51 years ago was motivated mainly by Cold War considerations rather than a desire for scientific discovery.

While the exploration of space represents one of the most sublime achievements of humanity, it arose from rockets built first in the service of the odious Nazi regime in Germany, and further advanced by the creation of nuclear weapons of a scale that can wipe out most life on Earth.

I have explored these paradoxes in my book, The Bomb and America’s Missile Age, which came out two years ago. That book is part of a reassessment of the history of space exploration that has been undertaken by many historians in recent years.

When the gigantic rockets needed to loft space vehicles away from Earth were being built as part of nuclear forces, and space achievements were seen as a measure of the political, economic and intellectual strength of the contending superpowers in the Cold War, the result was the space race that climaxed in the flights of Apollo. At that time and since, astronauts and scientists have made many unexpected and important discoveries about our universe, including the planet we live on.

One of them was a set of discoveries about how the atmospheres of planets work. That has led to the finding that humanity’s over-reliance on carbon fuels is leading to climate change, which now stands alongside nuclear weapons as a threat to the future of our species. 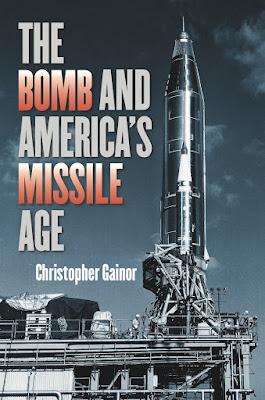