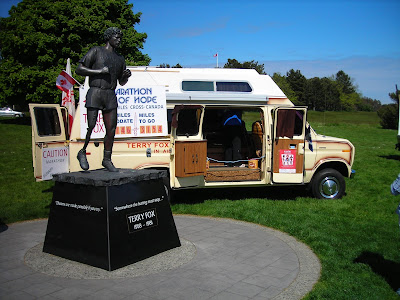 Forty years ago this past summer, Canadians were transfixed by the sight of a 22-year-old man who had lost a leg to cancer running across Canada from one end to the other with the help of an artificial leg.

Terry Fox set off on his Marathon of Hope with a step in the Atlantic Ocean at St. John’s, Newfoundland, on April 12, 1980, with the goals of raising funds and awareness for cancer research. During much of the early weeks of his run, few people were interested, and he faced challenges of weather and geography.

Fox was accompanied by a friend, Doug Alward, and later his younger brother Darrell, who travelled in a camper van during Fox's daily marathons of 26 miles. In late June, Fox took the Marathon of Hope into Ontario, where he was suddenly taken seriously, and crowds of supporters greeted him wherever he went. Fox quickly found out that fame complicated his efforts to run across Canada even more than being below the media radar did in the earlier days.

Fox continued to run across Ontario through July and August despite his awkward gait, the physical problems resulting from his demanding daily regimen, the crowds and the glare of publicity. Like many other Canadians, I followed his progress with growing interest from my home in Vancouver, where I was a newspaper reporter for The Vancouver Sun.  I had just been handed the medical beat and worked that summer under the wing of the Sun's talented and experienced science reporter, Tim Padmore.

The medical beat involves many things, including the politics of health care, controversies such as access to abortion, and the latest on medical research, including cancer. I had written little about that latter topic before I came to work on September 2, 1980. That day a desk near mine became a beehive of activity as Jack Brooks, a former city editor and veteran of British tabloids who was a master of deadline journalism, assembled a major breaking story for the final edition of the day. The stunning story was that Terry Fox was ending his run near Thunder Bay, Ontario, after having run 3,339 miles over 143 days because the cancer that had cost him a leg had reappeared in his lungs.

Fox was flown home to the Lower Mainland of B.C., where he went into treatment. A shocked nation reacted by contributing millions of dollars to a telethon quickly organized in support of Fox and the Canadian Cancer Society. I wound up writing a lot about cancer research that fall. During those days in September, Tim Padmore told me that the Sun’s managing editor, Bruce Larsen, wanted our newspaper to carry a major feature on Terry Fox’s cancer and how it related to research on the disease, and assigned us to research and write it. Tim took the idea to Blair MacKenzie of the Canadian Cancer Society and to one of Fox’s doctors. The idea required agreement of Terry Fox and his family, and since Fox was undergoing difficult treatment at the time, the initial response was no. We hoped that response might change at a later time.

Weeks later on December 1, Tim made one of his periodic checks with the Cancer Society, and the next day MacKenzie put the idea to Fox himself, who by then was feeling reasonably well during a pause in his chemotherapy. On December 3 my phone rang and I was talking to Terry Fox. The next morning Tim and I went to the Fox family home in Port Coquitlam in the suburbs of Vancouver, where we conducted a long interview with Fox. We also had Fox sign letters that would go to the people who treated his cancer, helped with his rehabilitation and even created the artificial legs he used in his marathon, authorizing them to speak to us.

In common with others, we were struck by the ordinary qualities of Fox’s home. His father worked on the railroad, and his mother raised Terry and his siblings. Dressed in a plaid shirt and well worn jeans, the soft spoken Fox did not seem exceptional. But what shone through our talk with him and the whole story of his Marathon of Hope was his quality of determination. When we spoke of the faint hope of resuming and completing his marathon and completing it with a step into the Pacific Ocean in Victoria, his face lit up. It was clear that there was nothing he would rather do.

The next day Fox spoke at a press conference at the B.C. Cancer Research Centre near Vancouver General Hospital to introduce researchers would work work in the brand new Terry Fox Laboratory. It would be his last appearance before the media.

The deadline for our feature about Terry Fox’s cancer was Christmas, so Tim and I divided the work of interviewing the care providers who had worked with Fox. Armed with our permission letters, we were able to get interviews with most but not all of the people who we wanted to speak with.

As the publication dates approached, Tim put a final set of questions to Fox over the phone and then crafted our work into three pieces. I went to Edmonton for Christmas as usual, and my first stop on this visit was University Hospital, where I completed one final interview with a cancer specialist and phoned in the quotes to Tim. The series appeared in The Vancouver Sun on Saturday December 20 and the following Monday and Tuesday, December 22 and 23, 1980.

Although the word cancer suggests a single disease, cancer is in fact a group of more than 100 different diseases, as we said in the introduction to our series. Each type of cancer has its own causes, courses and available treatments. Nurses and physicians told us about their challenging work treating treating Fox and other cancer patients.

The story we told about Terry Fox himself was one of determination. Always interested in sports, Fox picked up golf, wheelchair basketball and running as soon as he could after the initial cancer was found and his left leg amputated in 1977. The idea of running a marathon across Canada had come to him early in his course of treatment, but months before he formally proposed the idea to the Cancer Society in the fall of 1979, he had begun a rigorous training regimen of regular marathon-distance runs to prove to himself that his idea was feasible.

Even so, his idea was not an easy sell, and he had to gather proof that his health was up to such an audacious undertaking. But finally his cross Canada run began. Fox had convinced himself that he had beaten his cancer once and for all, but he reached that conclusion after skipping an x-ray at the time his run began that might have shown otherwise.

Reporters such as Leslie Scrivener who followed his run had already written about how Fox’s determination to complete every part of his cross-Canada run occasionally caused disagreements with the people who worked with him. When he spoke to Tim and I, Fox noted that the halfway point of his planned run was reached as he approached Sudbury on August 3. By the time he was forced to end his run near Thunder Bay nearly a month later, he had completed two-thirds of the distance from St. John’s to Victoria. Persistent statements that he had run only half-way to his goal still rankled him.

Three months of difficult cancer treatment after he left Thunder Bay, Fox told us that he would do everything he could to keep fighting the disease, including calling on the power of prayer. “I know the percentages don’t look very good, but when you look at everything, I think I’ve got a lot going for me.”

Nearly seven months later, Terry Fox passed away as Canadians stood vigil. Soon the first of what has become an annual run in his honour continued his effort to raise funds for cancer research. Even this year, when the coronavirus pandemic has hit the bottom lines of many charities, including the Cancer Society, the 2020 Terry Fox Run went virtual and raised more money than ever. Today Terry Fox remains as big a hero to Canadians as he was four decades ago, and his fame has spread beyond Canada’s borders.

Our feature on Terry Fox’s cancer has proved to be a valuable resource for people wanting to learn more about his life.

Today survival rates for osteosarcoma, the rare type of tumour that afflicted Fox, are higher than they were in his time, probably due in part to the research that his life inspired. Indeed, scientists and physicians have made progress in the fight against many forms of cancer, but there remains a long way to go in this quest.

Several monuments around Canada honour Terry Fox and his Marathon of Hope. My favourite is the relatively modest statue at Beacon Hill Park in Victoria where the Trans Canada Highway ends (or begins, depending on one’s viewpoint) at the Pacific Ocean, and where Terry Fox wanted more than anywhere else to be the spot where his Marathon of Hope would conclude.