NASA Looks at the History of Commercial Space


With the commercial space industry finally moving to a central role in spaceflight with the first flights of the SpaceX Crew Dragon spacecraft to the International Space Station, the NASA History Program Office appropriately chose this time to look back at the history of Commercial Space.

Speakers included historians and other academics, entrepreneurs, scientists, promoters, regulators, journalists, and officials from NASA and the military, all of whom joined the meeting from various locations around the world, most memorably Astrosat CEO Steve Lee’s Final Session keynote from inside a sailboat off the coast of Scotland.

The symposium began with journalist Eric Berger’s account of SpaceX’s difficult early days, and then the first full day of discussions on March 18 focused on what constitutes Commercial Space, and the legal and entrepreneurial frameworks that surround it.

The symposium featured the relationship between private enterprise and government in its various guises such as customer, regulator, and supporter. Eminent historian Roger Launius discussed possible models for commercialization on the Moon such as the Antarctic legal regime for future scientific research and the National Park model for tourism there. Launius and Wendy Whitman-Cobb of the USAF School of Advanced Air and Space Studies also recalled how the U.S. Government’s relationships with railroads and the commercial air industry offer lessons for Commercial Space.

Rick Sturdevant of the U.S. Space Force, Deganic Paikowsky of Hebrew University and others discussed how the dual military and peaceful uses of space technologies affect how they are regulated. And as Sturdevant and other speakers pointed out, U.S. military and other government procurement has shifted away from buying launch vehicles to procuring launch services.

To me, the most interesting presentation of the day also opened the discussion that was the topic of the following morning – the efforts to encourage space commercialization in the 1980s, the early days of the Space Shuttle program. Harvard historian Matthew Hersch outlined what he saw as the hard-won lessons of the shuttle years for those who expected the shuttle to open space to commercialization.

Shuttle supporters and commercial spaceflight advocates in the 1980s were disappointed when their assumption that the shuttle’s promise of low-cost space access would open markets to Commercial Space did not come to fruition. Hersch also argued that another mistaken belief was that winged space vehicles such as the shuttle were the inevitable form of future spacecraft. Efforts in the past to commercialize new technologies had often failed until the government offered subsidies and incentives – and that applied to the shuttle as well.

Scott Pace, director of the Space Policy Institute at George Washington University, opened the March 19 panel on the shuttle era by providing some of the flavor of the time. He recounted meeting physicist and space colonization advocate Gerald K. O’Neill and then joining other libertarian space advocates to fight the “socialistic” Moon Treaty of 1979 that was seen as a threat to private enterprise in space and therefore was never ratified by the United States.

John Logsdon, Pace’s predecessor at the Space Policy Institute, addressed the space policy of President Ronald Reagan in the 1980s, including the beginnings of policies explicitly aimed at commercializing space activities and ending NASA’s monopoly on many space activities. That period was also known for the beginnings of the private provision of launch vehicles, hopes for microgravity research, and rivalries between U.S. government agencies to regulate private space efforts. Many of the Reagan space policies were driven more by ideology than facts, Logsdon said.

Going beyond the outsized hopes for the Space Shuttle and the ideological fervor of the Reagan Administration, Texas A&M historian Jonathan Coopersmith spoke about the entrepreneurial energy of the time, stoked by the idea that space was “the next big thing.” But space was not different than other technologies that emerged in a boom that was followed by a bust, he said. The 1980s and 1990s saw many false dawns for Commercial Space. One of the most studied failures of the era was the U.S. government’s attempt to commercialize civil remote sensing, explained at this event by Brian Jirout of the Georgia Institute of Technology.

Pace concluded that we are now at last entering the commercial era in space. Looking back on the last 40 years, Logsdon said, “the market worked.” At more than one point, I got the impression that the Space Shuttle was in fact an impediment to the commercialization of space, contrary to the intentions of its creators.

The present day was represented by speakers from NASA who are facilitating commercial applications available on board the ISS and other NASA spacecraft and facilities, and from some customers, including Adidas researcher Henry Hanson, who is doing microgravity research to make better balls, running shoes and foam.

Steve Lee, whose Astrosat firm provides remote sensing and other space services, told the symposium that he doesn’t go to space conferences to do business. Instead he looks elsewhere for potential customers who need space products or space solutions. Lee has found that Earth observation and other space products are often overpriced, and many space firms try to do too much – they may be good at launching, building and operating spacecraft, but maybe they aren’t so adept at analysing the data they obtain.

I came out of the conference with some ideas about why space commerce is flourishing now relative to a generation ago, but no conclusions. Some of today’s successes may be the result of a shift from traditional space contractors to a new generation of firms like SpaceX and entrepreneurs like Steve Lee. Some of it may come from continued encouragement from NASA and the military. Or it may be the shift from the U.S. government designing, buying and operating rockets and spacecraft to simply purchasing the services, supporting the builders and freeing them to sell their services to other customers. Another possibility is that Commercial Space has simply gone beyond its first boom and bust cycle, and now is gaining a firm footing.

The symposium could have benefitted from more content on the evolution of NASA’s Commercial Crew Program, which played a major role in the rise of space firms and is reshaping the U.S. space program. Nevertheless, the talks and panels, many of which aren’t reported here, provided much food for thought on the history and future of Commercial Space.

NASA Acting Chief Historian Brian Odom reports that attendance at the meeting neared 700 people at one point and generally stood at about 300 people throughout the event. This attendance and the ability to bring in speakers and participants from around the world who might otherwise not be available may point to future virtual symposia once we move into the post-COVID-19 world. Virtual meetings do not provide much opportunity for offline conversations between participants, so perhaps in the future NASA might consider livestreamed symposia conducted on site augmented with virtual speakers. 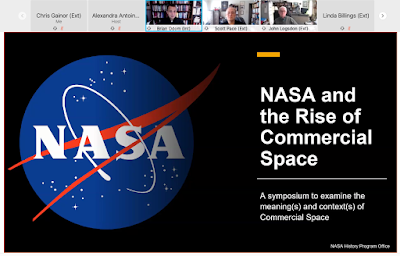